Start a Wiki
Jake Long Junior[1] was Jake Long's imaginary mental image of his future potential son seen in two cases of mental imaginary scenes where Jake imagined what he himself might be like in the future as a father[2]. At first, Jake imagined himself as a grown-up, similar in appearance and attitude to his own father, calling out to "Jake-a-roony Junior" in an embarrassingly geeky fashion.

"Junior" looked a lot like Jake with a thinner face and wilder hair with only three green stripes to the sides and top of his head.

While the first imagination caused Jake "Senior" to shudder in apprehension, after a better appreciation for and spending a day with Jonathan, his next imagination was much more heart-warming. 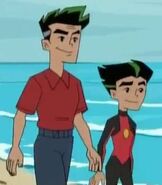 Jake's imagined future self walking with his imaginary son. 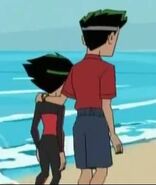 Retrieved from "https://adjl.fandom.com/wiki/%22Jake_Long_Junior%22?oldid=16542"
Community content is available under CC-BY-SA unless otherwise noted.