Aunt Cathy[2][3] is one of Jake's relatives on his mother's side, and Gregory's mother. She is usually holding the family reunions of Jake's dragon family on her own private island, off the coast of the Florida Keys. She seems to be wealthy, as she owns an island. Also, she must have married a magical being, since she mocks Susan for having a "non-magical" husband. However, it remains unknown if that man is a dragon or not, or if he is even still married to Cathy as he is nowhere to be seen during the family reunion.

It has to be noticed that she is Susan Long's cousin instead of her sister, as she asked of Susan, "Where's Uncle Lao Shi ?". However, it is unknown if her parents were related either to Lao Shi or Jake's grandmother, although it seems more likely it was Lao Shi. Her relationship with Susan mirrors the one between Jake and her son 'Greggy'.

It can be assumed that she does not have any dragon powers since her cousin, Jake's mother, said many times that "[dragon powers] skipped my generation". Because apparent her age looks to be about the same as Jake's mother's and the close age proximity between their children—Gregory is one year younger than Jake and Andrew and Haley seem to be the same age—they are certainly of the same generation and therefore "humanilocked".

She and her side of the family were only seen the one time. 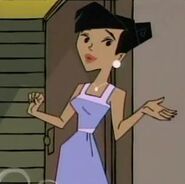 Retrieved from "https://adjl.fandom.com/wiki/Cathy?oldid=24175"
Community content is available under CC-BY-SA unless otherwise noted.