Councilor Andam[3][4] is a former World Dragon and protector of Africa, who now serves as a member of the Dragon Council, apparently headquartered on the Isle of Draco[5].

Councilor Andam is the Dragon of Africa and apparent leader of the Dragon Council (he was the one who made the thousand year toast). He's also the administer of the Dragon test: Wisdom in battle. Like Councilor Kulde, he believes Jake shows much potential as a dragon. Initially, Andam's clothes were mostly red, while later they were mostly purple.

There has been spotted at least one dragon who looks almost identical to Andam except for being lighter in color on his nose[6].

Councilor Andam's Galleries from Both Seasons 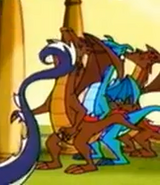 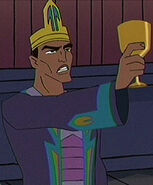