Councilor Kulde[2][3]is a member of the Dragon Council, and a former World Dragon.

Councilor Kulde is a Dragon of Norway and the administer of the Dragon test: Judgement in fire. Like Councilor Andam, he believes Jake has much potential as a dragon. This most likely stems from the fact that Jake once sacrifices his own victory to save Fred Nerk when he is captured by the Dark Dragon, even though Jake knows that if he loses he would lose Lao Shi as a teacher. Initially, Kulde's color scheme was mostly just blue, while later it was mostly a pinkish purple.

Kulde may have an apprentice or partner, as he is seen doing the fall of faith with a young orange dragon[4]. Other dragons also did this with their partners or apprentices. Lao Shi did it with Jake. 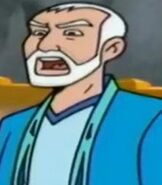 Kulde and the un-named orange dragon.

The un-named orange dragon from the back 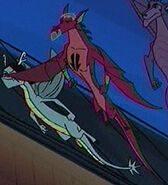