Euryale[1] (voiced by Hynden Walch[2][3]) is one of the three Gorgon sisters alongside Fury and Medusa. Her goal is to rule over the world with her sisters.

Sometime in ancient Greece, Euryale ruled over all magical beings with Fury and Medusa. She was overthrown by a warrior, presumed to be the Greek hero Perseus, who used the Gorgon sisters' own reflection to defeat them. They were turned to stone due to their spell backfiring at them. Euryale and her sisters then remained imprisoned as marble statues for hundreds of years.

It is currently unknown how exactly Euryale ends up in New York City, but it is possible that, like her sisters, she was mistaken for an ancient Greek sculpture and shipped to North America. She could have also been moved by magical means. She ultimately ends up being used as a fountain ornament inside a company building called "Vidal Gorgon Industries" in Manhattan. In her first appearance[4], she is awakened by Fury and assists her sister in her quest to reunite with the last Gorgon, Medusa. She is later defeated by Jake and his friends: she turns to stone after a feud with her sisters and sinks at the bottom of the Hudson River.

In her second appearance[5], Euryale is once again freed by Fury and embarks on a quest to get rid of the American Dragon and rule the world. However, her freedom is short-lived, for she is turned to stone again and sinks back into the river on the very same day.

Personality and Relation with Other Gorgons

Euryale is the vain and materialist one of the Gorgon trio. This is proven when she notices Fury wearing her bracelet and openly disapproves of it[4]. She also mentions going shoe shopping after getting rid of the American Dragon[5]. In the same episode, she also shows a bit of impatience by complaining about how long it took for Fury to set her and Medusa free, although it merely took a few hours.

Just like any siblings, Euryale often fights with Fury and Medusa, most often over which of them is the most important Gorgon and who should be ruler of the world. But even then, Euryale is able to put her own interests aside in order to work with her sisters in bringing down Jake.

Because of her slim body, Euryale is a very agile woman. Her skin is of a dark shade and she has dark green snakes for hair that stop approximately a few inches past shoulder length. She can probably, like her sister Fury, cut her snakes like regular hair and have them regrow naturally. She is always seen wearing a short green dress inspired by ancient Greek robes, sandals, and bronze accessories.

From what is shown in the series, Euryale has the very same powers that her sisters possess.

She can, like Fury, free anyone imprisoned in stone (Gorgons and victims alike) by casting a spell that consists of blasting energy out of her hands onto the target. She can also use this power as a regular attack whenever she fights.

Like her two Gorgon sisters, Euryale has the ability to turn anyone to stone. The only condition is to have her sisters freed from their marble prisons and present alongside her. When Euryale's eyes glow red, her victims will be paralyzed at once after looking directly at her. She can also use a weaker version of this ability, which hypnotizes anyone caught under the spell. She uses it on Trixie and Stacey Wintergrin's cheerleading team[4]; the girls must then obey to every order they receive. When the hypnotizing spell is temporarily disabled or permanently broken, the victims will have no recollection of their actions when they were under its influence.

Euryale's snakes can also help during a fight by lunging at foes and biting at them, though they are not venomous. They can also expand in length and mimic a spider's legs, which permits Euryale to move about faster and more easily. 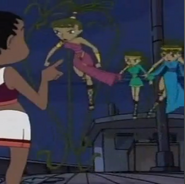 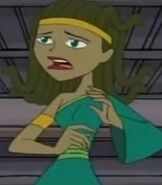