Jenkins is a tall and muscular young adult with short black hair. He is constantly seen wearing a red shirt with white rims and a pair of navy shorts. He also wears a pair of red and white shoes and always has an orange whistle attached by a brown string around his neck.

Counselor Jenkins is a very, very competitive young man. To him, winning the Mugwomp Cup is the most important part of the camp's experience. He often appears strict with his fellow junior counselors, and even pushes campers over their limits in order for them to win the Mugwomp Cup (as seen at the beginning of "A Ghost Story" when he pushes a 7 year old Jake to race with a sprained ankle, and again with Eugene). In his opinion, it is unthinkable that anyone would willingly let go of the cup, even if it were for a very good reason.

Because Brad Morton has won the Mugwomp Cup several times over the years, Counselor Jenkins seems to favorite him over other junior counselors. This gives Brad the chance to prank other campers as much as he pleases without being punished.

It seems as though Counselor Jenkins is very dedicated to Camp Mugwomp since he has very likely worked there for several years. Back when Jake was only 7 years old, Jenkins was the head of cabin 8 and Jake's counselor. It is most probable that Jenkins continued to be a junior counselor for the next few years until finally, in "A Ghost Story", he receives a promotion and becomes Head Counselor of the entire camp. He now oversees all of the camp's activities (such as singing by the fire side at night or telling ghost stories by the graveyard) and now organizes the Mugwomp Cup competition. He also takes care of all the junior counselors and assigns each and every one of them to their cabin. 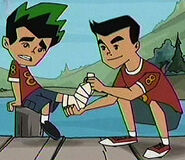 Retrieved from "https://adjl.fandom.com/wiki/Head_Counselor_Jenkins?oldid=19821"
Community content is available under CC-BY-SA unless otherwise noted.