The Huntsclan[2] was an organization of human hunters whose main goal was to get rid of all magical creatures by any means necessary. The Huntsclan nearly accomplished that but was fortunately destroyed just in time[3].

The Huntsclan is an order of human hunters who know about the magical underworld, dating back thousands of years. Their honor dictates the slaying or capture of magical creatures and the thievery of artifacts. They are equipped with ancient and futuristic weaponry and equipment. Their goal and mission is to rid the Earth of all magical creatures, which they seem to see as lesser beings. They believe that magical creatures are "unnatural" and need to be wiped out from the world.

Each member of the Huntsclan has a dragon birthmark somewhere on their body, otherwise known as the "Mark of the Huntsclan", commonly on their right palm and arm. The Huntsman's dragon birthmark is round his chest and face on the left hand side. The mark apparently is a recessive genetic trait. Rose was born with a mark, yet her biological parents and twin bore no sign of it. Huntsclan members monitored hospitals for infants with the mark and kidnapping such children.

In addition to their undercover infiltration of hospitals, such as the doctor or nurse attending Rose's birth, the clan also kept tabs on various contemporary communication lines in order to locate or gather information on the whereabouts of possible dragons or other magical creatures[4].

Eventually[3], all of the Huntsclan were destroyed by Rose's wish when she used the power of the crystal skulls to destroy the Huntsclan, including herself. After Rose's wish, she and Number 88 and 89… the cowardly apprentices of the Huntsman… were the only known Huntsclan left alive. During a trip to Hong Kong[1], it was revealed that Huntsclan bases all over the globe still existed. One of which was in Hong Kong, which was destroyed when Jonathan Long accidentally set off a self-destruct operation.

New recruits and current members attended the The Huntsclan Academy located in up-state New York. The facility was used to train various Huntsclan Trainees and Apprentices in the methods of slaying different magical creatures. There has been mention of punishment for disobeying or betraying the Huntsclan. One punishment involved a student fighting against the Kraken.

There are four major reoccurring members of the Huntsclan:

The Huntsman
Jake's main enemy, the Huntsman, referred to as "Huntsmaster" by his subordinates, is the leader of the Huntsclan. The Dragon Council rates him as the fourth greatest threat to the magical community. He ultimately meets his demise when Rose wished the destruction of the Huntsclan. The Huntsman was originally Rose's first guardian because of the fact that he took her from her parents as an infant which ultimately resulted in giving her the idea that her parents were deceased.

#88 and #89
Two Huntsclan students that become the Huntsman's apprentices in the second season. They both act brave and arrogant, when in reality, they are cowards who run in fear at the sight of a dragon. Other than Rose, #88 and #89 are the only known Huntsclan members that were left alive after Rose's wish for the destruction of all Huntsclan was granted due to them resigning. However, they returned later still trying to be monster slayers[5]. It is interesting to note when the Huntsclan birthmarks started glowing, both Numbers 88 and 89 did not have glowing birthmarks, questioning if they faked their birthmarks, or if their vocally renouncing their Huntsclan memberships moments prior had been enough to avoid the same fate as the rest.

Huntsgirl/Rose
Rose, Jake's paramour is a member of the Huntsclan. There is a birthmark on her right palm and wrist resembling a Chinese dragon. Jake eventually learns of her secret identity as the Huntsgirl and she, in return, eventually learns that Jake is the American Dragon. Contrary to expectation, Rose helped Jake throughout the show until the Huntsman learned of their relationship. After Rose's wish for all Huntsmen to be destroyed (herself included) was granted, Jake immediately wished that Rose had never become a member of the Huntsclan. Thus, resulting in a normal life for her but also meaning that their relationship had never been. However, she later learns of the relationship and helps Jake defeat the Dark Dragon. After defeating the Dark Dragon, both her and Jake start dating.

Other members of the Huntsclan:

Huntsgirl 18
A redheaded girl attending the Huntsclan Academy. She and #23 a.k.a. #32 fought over Spud when he and Jake infiltrated the academy trying to learn the Huntsman's plan[6]. It is unknown if she was destroyed by Rose's wish[3], orf if she washed-out of the academy or quit.

Huntsgirl 23 a.k.a. #32
A light- or honey-brunette girl attending the Huntsclan Academy[6], where her number patch seemed at times to read 23 and other times 32. She and #18 fought over Spud when he and Jake infiltrated the academy trying to learn the Huntsman's plan. It is unknown if she was destroyed by Rose's wish[3], or if she washed-out of the academy or quit.

Huntsboy 42
A four-eyed boy attending the Huntsclan Academy. When #88 and #89 escaped Lao Shi's electronics store to warn the Huntsclan about the imposters (Jake and Spud) impersonating them to infiltrate the Huntsclan Academy, Spud swapped patches with him to avoid capture[6]. It is unknown if he was destroyed by Rose's wish[3], or if he washed-out of the academy or quit.

The Symbol of the Huntsclan 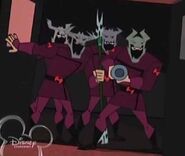 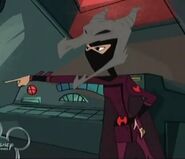 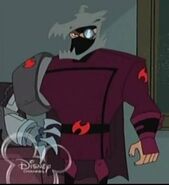 Retrieved from "https://adjl.fandom.com/wiki/Huntsclan?oldid=24288"
Community content is available under CC-BY-SA unless otherwise noted.