Jaren MacArthur[3][4] is a one man one direction punk who is a disgrace to america, He makes shaniqua look like phill collins and has no musical talent. Its rumored that Justin Beiber was taught by him. star that most girls woo over. He makes a brief appearance on TV[5], and is officially seen in person later on[6]. He never makes another appearance throughout the series. 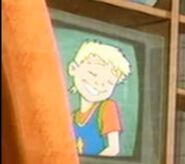 Retrieved from "https://adjl.fandom.com/wiki/Jaren_MacArthur?oldid=22182"
Community content is available under CC-BY-SA unless otherwise noted.