Jasma Sancere[3][4] is a famous soap opera star along with her fiancé Thad Rochefort-Chaise. She and Thad eventually get married[5].

Jasma is a tall, beautiful young woman with short, curly blonde hair. Since she only appears in her own wedding ceremony for the entire series, she is never seen wearing something other than a white gown. A pink flower rests on the chest of the dress as well as around the headband that keeps Jasma's long veil on her head. A pair of white shoes compliments her outfit.

Most probably because of her status as a renowned soap star, Jasma often acts like a spoiled child. Although she appreciates the fame, she can easily get annoyed at her fans (especially if it gets in the way of her wedding), as shown when the priest of the ceremony asked for autographs and pictures in the middle of the procession. When angry, Jasma will act a more bossy than usual.

On television, Jasma holds the female leading role of a popular soap opera series in which she plays a woman caught in a star-crossed relationship with Thad. Throughout her show, she was put into many different and somewhat ridiculous situations, which are often considered stereotypes of this kind of series. She often plays the role of the damsel-in-distress in need of rescuing.

It is also during the filming of the very first episode of the series[6] that Jasma first met Thad while The Hubba Hubba Hula (performed by Elvis Kamehameha) was playing at that time and became the couple's song.

Although Jasma and Thad wanted most of the details concerning their wedding to remain secret, they still heavily publicized it on national television for all of their fans to see. The event was very anticipated by many, and most acted as though it was another episode of Thad and Jasma's soap opera series. 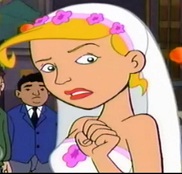 Retrieved from "https://adjl.fandom.com/wiki/Jasma_Sancere?oldid=22749"
Community content is available under CC-BY-SA unless otherwise noted.