Medusa[1] is one of the Gorgon sisters alongside Fury and Euryale. Her goal is to take over the world with her sisters.

During the times of ancient Greece, Medusa and her sisters ruled over all magical beings on Earth until they were overthrown by a warrior, presumably the Greek hero Perseus. He used his shield as a mirror, which reflected the Gorgon's paralyzing spell back onto them, thus turning all three to stone. Medusa and her sisters remained stuck in marble for more than a hundred years.

It is currently unknown how exactly Medusa ended up in the middle of the Hudson River near New York City. It is possible that she was, like her sisters, mistaken for an ancient Greek sculpture and shipped to North America to be displayed in a museum, but was lost in a shipwreck. It is also possible that she was moved by magical means to guarantee her imprisonment. In her first appearance[2], she is awakened by her sisters who had to fetch her from the deep waters with a fishing net. Her freedom is short-lived, however, when she starts feuding with Fury and Euryale and gets turned to stone, sinking once again into the river.

In her second appearance[3], Medusa is once again freed by Fury and joins her two sisters on a quest to defeat the American Dragon and rule over the world. Her freedom is once again short-lived since she gets turned back to stone by Jake and sinks in the Hudson River once more.

Personality and Relation with Other Gorgons

Medusa is a snobbish and proud woman who likes to have things done her way. She takes pride in the fact that most people know her name over Fury's or Euryale's. She also comes out as ungrateful since she never shows a hint of gratitude toward her sisters for breaking her free.

Like siblings usually do, Medusa often quarrels with the other Gorgons, sometimes to the point that she'll engage into a fight against them. She bickers with Fury and Euryale over who is the most important of them and who should be ruler over the world. Although Medusa insists (with good reasons) that she is the most important of the Gorgons[2], she is the first to call up a truce[3]. She knows that, if her sisters and her can't work together, they will never defeat the American Dragon.

Medusa, like her sisters, is quite thin in size. She has dark-tinted skin and dark green snakes for hair that curl on top of her head. It is presumed that, like Fury, she can cut her snakes just like regular hair and wait for them to grow back. She always wears a blue dress inspired by ancient Greece togas, sandals, bronze bracelets and other similar accessories.

From what is shown in the series, Medusa and her sisters share the same powers.

Although this is never shown in the series, it is possible that Medusa can, like Fury, free her sisters from their stone prison. All she has to do is to cast a spell on them (or in other words, shoot energy out of her hands) that can crack the marble and break her sisters free. She can also use this power as a regular attack and free her victims if she so wishes.

When her eyes glow red, Medusa can turn others to stone, but only if her two sisters are freed from their marble prison and are present beside her. Her victims also need to look into her eyes for the spell to work. Like Fury and Euryale, Medusa can also use the weaker version of the paralyzing spell, which can hypnotize anyone she wants. She is never seen casting the spell directly, but she can clearly control those under its influence as shown when she orders around Stacey's cheerleading team[2]. Her victims will have no recollection whatsoever of their actions while being hypnotized.

Medusa can also attack with the snakes in her hair. Just like Fury, her snakes can expand to incredible lengths and mimic spider legs to carry her around. 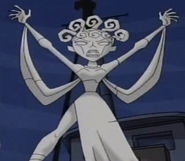