Start a Wiki
Rose's Parents[1] are Rose's seldom-seen mother and father. Not much is known about them, not even their names.

Not long after Rose and her unnamed twin were born[2], Rose was taken away from her family by the Huntsclan after her dragon birthmark was identified by the doctors. They are not seen again until the Huntsman used their safety to blackmail Rose when it becomes known she was a traitor[3], where they were seen on a video screen eating dinner. Rose cooperated, but in the end once again betrayed the Huntsman by using the Aztec Skulls to destroy the Huntclan.

In an attempt to save Rose, Jake used the Aztec Skulls to wish Rose had never been kidnapped, thus putting her in a normal life with her parents. They moved to Hong Kong shortly after and are not seen again until Jake needed her help in defeating the Dark Dragon[4]. 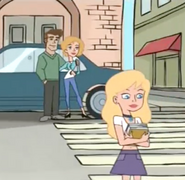 Retrieved from "https://adjl.fandom.com/wiki/Rose%27s_Parents?oldid=22771"
Community content is available under CC-BY-SA unless otherwise noted.