American Dragon Jake Long
Register
Don't have an account?
Sign In
Advertisement
in: Characters, Males, Friends of Jake,
and 4 more

Stan Lipkowski[3][4], also known as Stanley or Stan the Sewer Troll, is a Troll living in the dark sewers of New York City.

He makes his first appearance in the episode "Old School Training" is featured in "Adventures in Trollsitting" and "Halloween Bash" (all from Season 1). Stan never makes an appearance in Season 2.

Stan's entire body is covered in dark purple fur, except for his feet, hands and face, which are bare and of a pale greenish skin color. His fur is longer on top of his head (which gives the impression that he has long hair) and even has some around his chin like a beard. Also interesting to note is his single eye in the middle of his forehead very reminiscent of the Cyclops. He also has a pointy nose, two fangs protruding out of his mouth, and constantly wears a green bow tie with a pair of brown pants with red suspenders. When trying to fit in with non-magical creatures, Stanley will cover up his upper body with a white shirt. He also has a special pair of glasses that permit him to appear as though he has two eyes instead of one.

Unlike most Trolls, Stan is very friendly and would never cause trouble on purpose. He is somewhat naive, always risking to be discovered by non-magical creatures by being his curious self. He can also be somewhat obnoxious, as experienced by Jake when Stanley loudly forced himself into the house at five in the morning in "Adventures in Trollsitting". In general, Stan acts like a child and wouldn't turn down an invitation at pretending to have a tea party with dolls.

Stanley himself doesn't really possess any magical powers, but his fur is indeed magical. Whenever it gets burned by the sun or by any other means, the hair will morph into a Hairball Monsters that will multiply several times before going on a feeding frenzy. This explains why Stanley lives in the sewers: he does so to avoid getting in contact with the sun and burning his fur.

One talent of Stan's would be his ability to fit inside a toilet regardless of its size. He also has good knowledge of the sewer network below the city.

As unlikely as it may sound, Stan is in a close relationship with Jake's Aunt Patchouli. They used to date back in college (at NYU in the '80s), but ended their relationship when Patchouli had to move away. In "Adventures in Trollsitting", Aunt Patchouli claims they're just old friends, but it is obvious they still have feelings for each other as seen from their reaction when they finally meet up. Stan even decided to head to Jake's home several hours early in order to be ready for his date and organized a night at the restaurant just for Patchouli. 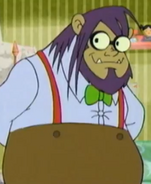 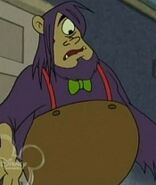 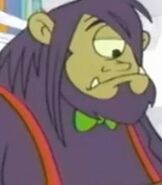