Start a Wiki
The Tooth Fairy[1][2] is a character in American Dragon: Jake Long.

She is a magical creature, a fairy, which is in charge of collecting old teeth in exchange for coins, which in America takes the form of quarters.

When Haley had lost a tooth[3], it was discovered that the Tooth Fairy's human assistant, Dr. Diente, had betrayed her. So she wanted Jake's help in stopping him from using the magical powers of Haley's dragon tooth.

During Eli Pandarus' Miss Mystical World Pageant she served as one of the judges[4].

She later assisted Jake in foiling the Dark Dragon[5] by directing her Tooth Minions to battle the Shade Demons. When they proved no match against the Dark Dragon himself, she offered a tooth brush if he would stop behaving rudely. He hit her instead, sending her hurling her into dirty sewer water, ruining her dress. Which angered her enough to drop construction equipment on the Dark Dragon. 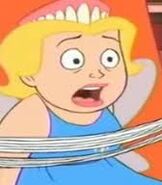 Retrieved from "https://adjl.fandom.com/wiki/Tooth_Fairy?oldid=23704"
Community content is available under CC-BY-SA unless otherwise noted.